Dave Agema, The Cult of Personality and Fanaticism

The fanaticism of the fringe in politics is rather alarming at times.

Over the period of years I have been an activist, I have witnessed- among conservatives and liberals, Republicans and Democrats, the impact of the cult of personality.’
It always leads to fanaticism and extremity.
In the political world, you see the cult personalities and their fringe followers prostitute the church, the Word of God, and the  over- simplistic minds of those who have been seduced into worshipping a man or a woman, rather than worshipping God.

Never have I have seen that more applicable than with Dave Agema,- the Michigan Republican National Committeeman- and his fringe band of fanatical apologists.
Their mocking of God, assertions that non Agema supporters will be “in trouble on Judgment Day”, that to disagree with Agema is “to side with Satan”, and that Agema is a “symbol of righteousness”, etc,

They even say that any Black American who does no “stand with Dave Agema” is “thinking with his/her color”.

None of these extremes are new to the American people. 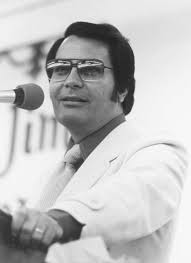 America saw this kind of fanaticism over the personality of Jim Jones in the 70s, which ended up in hundreds committing suicide by drinking Kool Aide laced with poison.
I doubt anyone will be committing mortal suicide in the cult of Agema. At least, I hope not.
However, I think it is fair to conclude, given the public crucifixion of anyone not placing Agema above Jesus (by his fanatical fringe group), that mental, emotional, intellectual, and spiritual decadence clearly plagues those who drink the Kool Agema (and all cult figures) passes around to those seeking a human savior.

The cult of personality never produces good results.
Only tragedy and calamity for both the worshipped personality and the cult which follows

“I appeal to you, brothers and sisters, in the name of our Lord Jesus Christ, that all of you agree with one another in what you say and that there be no divisions among you, but that you be perfectly united in mind and thought.

My brothers and sisters, some from Chloe’s household have informed me that there are quarrels among you. What I mean is this: One of you says, “I follow Paul”; another, “I follow Apollos”; another, “I follow Cephas ”; still another, “I follow Christ.” Is Christ divided? Was Paul crucified for you? Were you baptized in the name of Paul? For Christ did not send me to baptize, but to preach the gospel—not with wisdom and eloquence, lest the cross of Christ be emptied of its power.

For the message of the cross is foolishness to those who are perishing, but to us who are being saved it is the power of God.”

Nothing but division seems to follow Dave Agema and his not so merry band of fanatics.

All we can so is keep praying for them and try to mitigate as best we can the damage they do to our society at large.

I am not an "African-American'. I am a proud American, who happens to be of African descent. I am Christian. My personal relationship with Jesus Christ and the Word of God shapes my concepts of what it means to be a conservative. I am Pro Life. Devoted to the principles of free enterprise, limited government,and individual responsibility. I believe in the sanctity of marriage between a man and woman.
View all posts by sswimp →
This entry was posted in Education, Faith and tagged African American, Bigotry, Bishop Ira Combs, Cults, Dave Agema, Fanaticism, racism. Bookmark the permalink.